Protecting fish and the aquatic environment is an essential part of the Site C project. While the new reservoir will be able to support new and productive fish populations, we also know there will be changes to fish habitat, health and survival, and movement as a result of the project.

That’s why we’ve developed a thorough range of monitoring and mitigation programs to address these changes.

Since the 1970s, we’ve been gathering data and studying baseline conditions in the Peace River and its tributaries from Peace Canyon Dam to Alberta. General surveys completed during the 1970s were followed by large-scale inventories of fish communities in the late 1980s and early 1990s.

Since 2005, numerous baseline studies have been completed to understand the abundance, size and age structure, distribution, and population structure of fish in the Peace River and its tributaries.

We developed the Fisheries and Aquatic Habitat Monitoring and Follow-up Program to monitor fish and aquatic valued components during the construction phase of the project (2015 to 2024) and the first 30 years of operation (2024 to 2053).

The Fisheries and Aquatic Habitat Monitoring and Follow-up Program is a coordinated set of 18 distinct programs that:

While the project is being built, and after it starts operating, the project will affect the ability of fish to migrate upstream past the dam site.

That’s why we’re building two upstream fish passage facilities – a temporary facility during river diversion, and a permanent one during dam operations. These are being put in place so that fish can continue to migrate upstream and fulfill portions of their lifecycles in the Peace River and its tributaries.

Migratory fish are naturally attracted to fast-flowing water. With this in mind, the temporary facilities are located at the outlet of the diversion tunnels and the permanent ones will be located at the future generating station, where fish will be attracted to the high flows. At the facilities, we’ll capture and tag the fish, before transporting them by truck upstream past the dam site.

We're creating new or enhanced existing fish habitat in the Peace River to support many fish species, such as mountain whitefish, bull trout, and Arctic grayling.

Downstream of the dam site, the river levels will change following completion of the Site C project, which could cause areas to occasionally dry up and become unsuitable for the fish, algae and invertebrates that depend on permanently wetted habitats.

To counter this, we're increasing the amount of permanently wetted areas, by excavating the channels and placing habitat structures such as wood and boulders in the side channels to support fish in various stages of life. 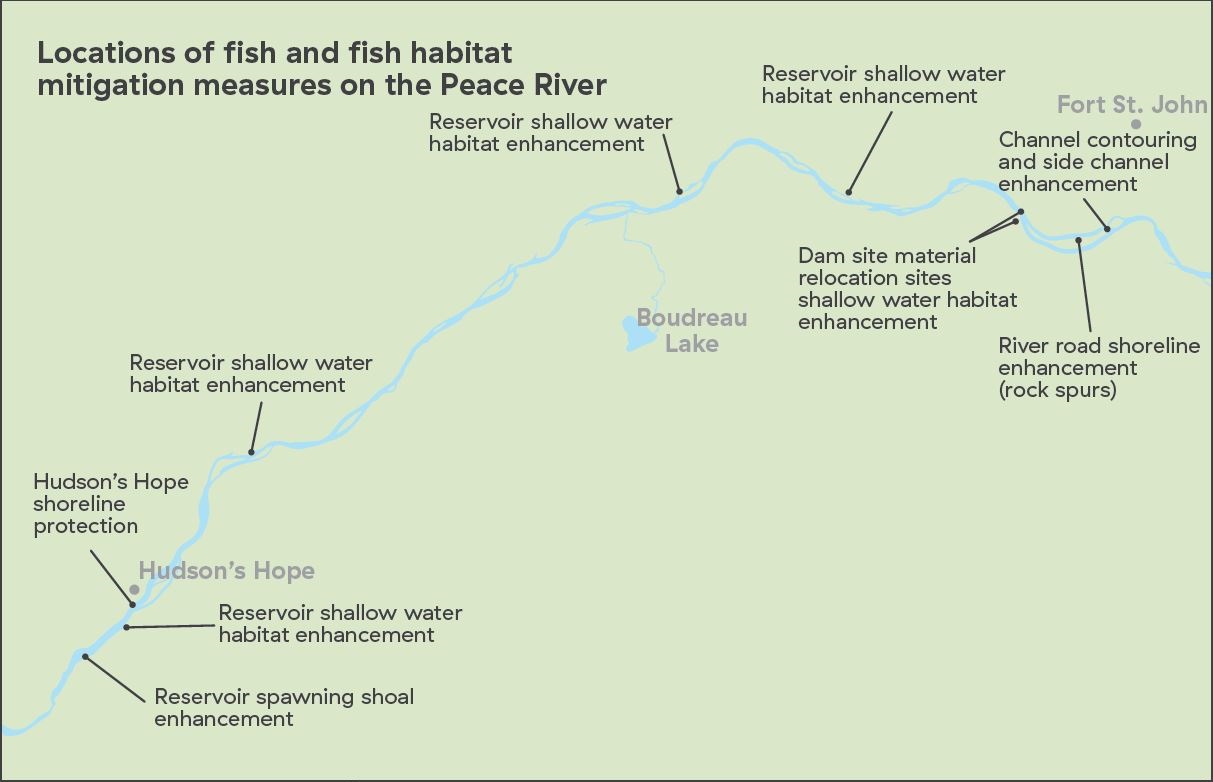