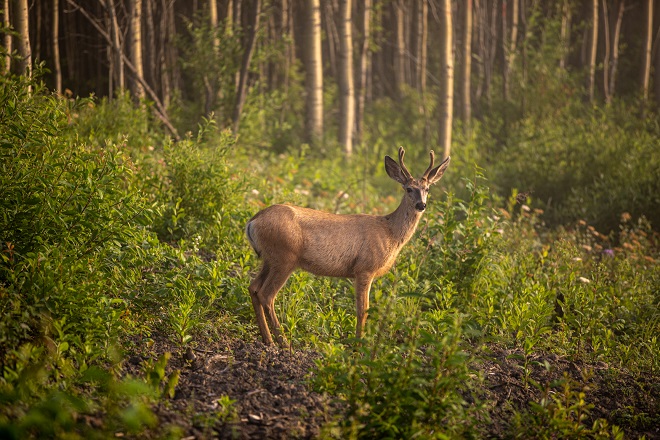 The objective of the wildlife and vegetation program at Site C is to avoid, reduce, or offset the potential impacts of the project on wildlife, wildlife habitat, vegetation communities and rare plants. This extensive program uses feedback from the public and Indigenous groups to respond to over 200 requirements from the project's provincial and federal approvals.

The wildlife and vegetation program spans the entire project's construction phase, going well into dam operations. It involves both mitigation measures during construction to avoid or reduce impacts, as well as species-specific monitoring programs and constructed offset features.

We're committed to developing and implementing mitigation to avoid, reduce, or compensate for the potential effects that could result from the project. These include:

We have  many wildlife and vegetation monitoring programs and field studies underway. Through these programs, we're monitoring for the presence and abundance of species to help clarify the effects of the Site C project and the effectiveness of mitigation. Read the reports from our monitoring programs.

Waterbird monitoring takes place every year in the spring and fall to see if there are any changes in the numbers of different species of shorebirds, marsh birds and waterfowl during migration in the Peace River Valley. Water-based surveys are conducted along the Peace River between Hudson's Hope and the Alberta border, and ground-based surveys are conducted along the transmission line right-of-way.

Songbirds are monitored each breeding season (May to July) to see if there are changes in their numbers and locations due to the project, and to better understand their habitat use. Surveys are done through counts by human observers. Songbird monitoring focuses on areas that will be impacted by the project, such as along the transmission line, and in the Peace River Valley.

Northern harrier and short-eared owl are the two ground nesting raptor species that may be affected by the project. Ground nesting raptors are monitored in cleared areas of the headpond to see if headpond activity is likely to affect them. Monitoring takes place with ground-based surveys three times a year.

We will install 260 nest boxes for cavity nesting birds near the future reservoir. These boxes will be monitored every two years.

We've installed 120 bat roosting boxes and a large multi-layered roosting structure, and we monitor their use three times per year. We also monitor bat activity 24 hours a day, 365 days a year in the cliffs near Portage Mountain Quarry, a quarry that was developed for Site C. The quarry was completely redesigned to avoid affecting the neighbouring bats, and our monitoring program is making sure that mitigation is effective.

Snake and amphibian monitoring is taking place along islands and the banks of the Peace River between the Site C dam and the Beatton River. The goal is to see if there are changes to the numbers and locations of these two groups downstream of the dam. Monitoring involves visual surveys for amphibians at wetlands, and the inspection of nearby artificial cover objects placed for gartersnakes. Snake and amphibian downstream monitoring was conducted through 2020 for the construction phase of Site C, and will resume again during the operation phase.

Bald eagle nests near the future reservoir are being monitored to identify the number of nests, and to see how the nests are functioning based on the number of chicks hatched. This information will help BC Hydro to understand if there are changes in bald eagle nest productivity due to the project, once new nests are set up on around the reservoir. Monitoring is done by helicopter three times a year.

Seeds, and in some cases whole plants, have been salvaged from rare plants of conservation concern in areas that are being affected by Site C construction. The plants are then grown in nurseries, in suitable habitat, and monitored to evaluate how well they grow. This type of mitigation requires a lot of effort, and for that reason isn't done very often, so the work being done for Site C is presenting a valuable learning opportunity for botanists.

We are building and restoring wetland habitat, to compensate for wetlands being lost as a result of the construction of Site C. The Golata wetlands near Clayhurst are a 50-acre wetland complex that has been restored in partnership with Ducks Unlimited. Wetlands are important because they provide a wide range of species with safe areas to eat, shelter and raise their young. They also help to clean pollution from the water, and help to regulate water supply and reduce the effects of drought. 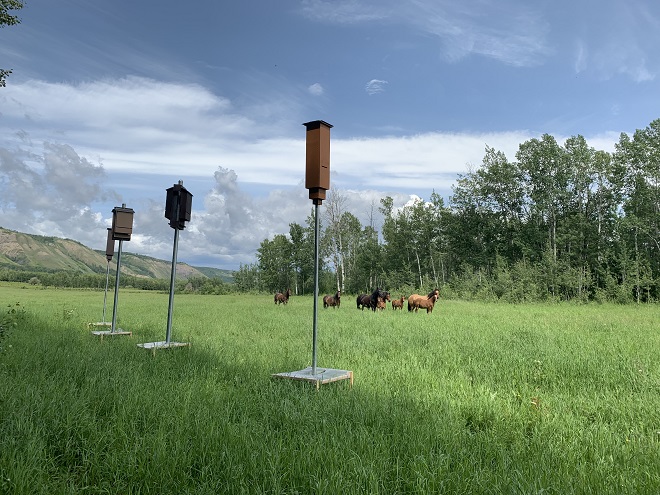 We are building new habitat structures for animals which may have their nesting areas disrupted by construction. These include: