Please sign up for construction updates to make sure you are receiving up-to-date information about the Site C project.

Once built, Site C will be a source of clean, reliable and affordable electricity in B.C. for more than 100 years. The engineering process that has been followed throughout the entire project is consistent with international best practices and the highest safety standards and has been reviewed by the independent Site C Technical Advisory Board.

Part of the design for the right bank enhancement is to extend the foundation deeper into the bedrock below. We're installing 96 concrete-filled steel piles that are 46 metres long and two metres in diameter which will tie in the dam buttress structure to the stable rock below to prevent any potential movement.

More than half of the piles have been installed.

Large concrete buttresses are being built at Site C. These buttresses, built underneath the powerhouse and spillways, form part of these structures and serve as a deep foundation.

The buttresses are built by excavating and replacing the upper layers of rock with roller-compacted concrete. The buttresses are embedded into their bedrock foundations, forming a 'shear key' which acts like a lock to enhance the stability of the hydroelectric concrete structures. 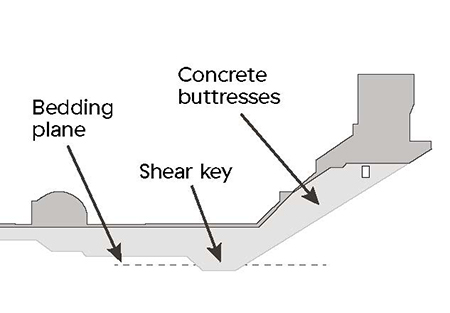 The shear key extends the bottom of the concrete structure deeper into the foundation. The key cuts through underlying bedding planes, which enhances the stability of the buttresses. A bedding plane is a surface that separates two layers of rock.

The original design for the buttresses extended the shear key about 35 metres below thebottom of the river channel and through what was, at the time, the deepest-known continuous bedding plane.

During construction of the powerhouse, spillways and buttresses, sensitive instruments monitored the bedrock foundation below and behind the buttresses for movements. This is best practice when building large dams.

Through this work, we identified small movements (millimetres) along a thin bedding plane located below the bottom of the concrete buttresses' shear key.

One of the project’s design objectives is to avoid movements of the buttresses, as the concrete structures built on top of them (and the generating equipment that will eventually be installed in the powerhouse) cannot accommodate even small movements without damage.

This discovery raised concerns that there could be further movements when the reservoir is filled, or if excessive water from the reservoir seeps into the bedrock foundation and builds up behind the buttresses.

We have identified a two-part solution to improve the stability of the right bank structures: extend the foundation deeper into the rock, and reduce water pressure that can build up in the bedrock foundation.

The first part of the solution is to improve the strength of the concrete buttresses beneath the right bank structures by anchoring the buttresses deeper into the rock below.

Vertical piles (large steel pipes filled with concrete) will extend the function of the shear key by drilling through the deeper bedding plane into the stronger rock below it.

The safety criteria established for the right bank foundation enhancements are consistent with the dam safety guidelines of the Canadian Dam Association and international best practices.

Given the scope, cost and schedule implications of the proposed measures, the Site C Project Assurance Board sought validation from the Technical Advisory Board and two recently engaged international dam experts to confirm the solution was appropriate and safe.

The two international experts were selected because they are both recognized globally for their expertise in hydroelectric dams and because neither had any involvement with the Site C project to date. Their reviews were received in January and February 2021.

In summary, the two international experts concluded that the solution we've proposed will ensure the right bank structures are safe and reliable for the long operating life of Site C, provided several details are addressed in the final design. These details are currently being addressed by BC Hydro and include optimizing the number, diameter, and configuration of the piles.

Work on the foundation enhancements began in 2021 and is expected to be complete by the end of 2023.