FORT ST JOHN: BC Hydro reached a major milestone on the Site C project with the completion of roller-compacted concrete placements in the upper spillway buttress on October 30, 2019. This achievement occurred seven months ahead of schedule.

Roller-compacted concrete is a special kind of concrete with unique properties that make it perfect for dam construction. This concrete is created on-site, then transported by trucks and conveyor belts to the buttresses. 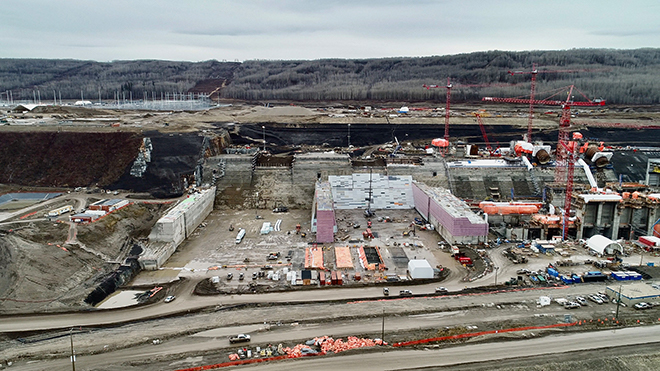 Looking south at the spillways buttress (left) and the Site C powerhouse, under construction (right).

The spillways buttress is one of three large concrete buttresses – or foundations – BC Hydro is building to support the Site C powerhouse, spillways and the dam itself. Together, they are a key component of the project’s design, and will ensure dam stability, including in the unlikely event of a major earthquake.

The powerhouse buttress was completed in October 2018, and the dam buttress is scheduled to begin in 2020.

Combined, the buttresses measure approximately 800 metres long and up to 70 metres wide, and are made up of approximately two million cubic metres of roller-compacted concrete. That's six times the volume of concrete used to build the Burj Khalifa, the tallest building in the world.